Travels into the Past

My daughter and I stop briefly in the New Hampshire town where I grew up, as part of a much longer day trip. Although Goffstown is three hours from where we live, my younger daughter had never been there. My parents have long ago moved back to New Mexico, my siblings spread out in their own adult lives.

The little village, where I haven’t been in years, is surprisingly unchanged. There’s some sprawl here and there, but not as much as I expected. A town ballfield has been converted to a cemetery, planted with saplings and marked, so far, with a single tombstone. Below that, the small pond where I learned to ice skate is still encroached by weeds and brambles, making for tricky skating but immensely interesting viewing for a child lying on the ice.

The snow has mostly melted here, and the earth is an amber-brown. Not a single shoot of spring green is visible yet. Walking around, I see the places that I loved: the gone-to-wild swathe behind our neighborhood houses — places a child could endlessly explore for years — the Ucancoonuc Mountains, the woods with huge glacial erratics surrounding the town. The library where I read out the children’s section and held my first job as a library page has been expanded. We walk through the library. Tom Wolfe famously wrote that you can’t ever go home. I can’t quibble with that wisdom, but walking through this library I loved so dearly, I step back into my childhood for a few minutes. Crammed with books, the library was both alive for me with the social chatter of the town but also ineffably fed my hungry imagination.

On this Wednesday morning, the library staff says hello and good morning to my daughter and me, and I feel, again, that same hum of life, endlessly unspooling, utterly fascinating. The shelves now stretch far up to the high ceilings, and this makes me so happy, to know the library is loved and funded.

Likewise, walking past my former house, I see a treehouse in the backyard and a tire swing from one of those enormous maples. Every summer, my father — and then his three children — painted the clapboards. Whoever lives there now does the same, I see.

I had expected to be sad, maybe nostalgic, about this town I never visit any longer. But walking around with my teenager, I see immediately that I’ve taken that town with me, that the child and teenager I was then carried that love of woods and wild, of imagination and dreaming, the same quirky family story and laughter with me.

At my parents’ former house, I see children play in that mixture of tended domesticity and the small patch of woods behind that old house. It doesn’t make me feel old; instead, I feel resilient. Driving, we listen to Coronavirus news, to the stock market careening, to the political uncertainty of this world. My daughter and I talk and talk and talk. Listening, I don’t second-guess myself, I don’t wonder what I’ve failed as a mother. I know, instead, I’ve given her a fertile, imaginative childhood, and I know it’s hers, to decide her own course, too. 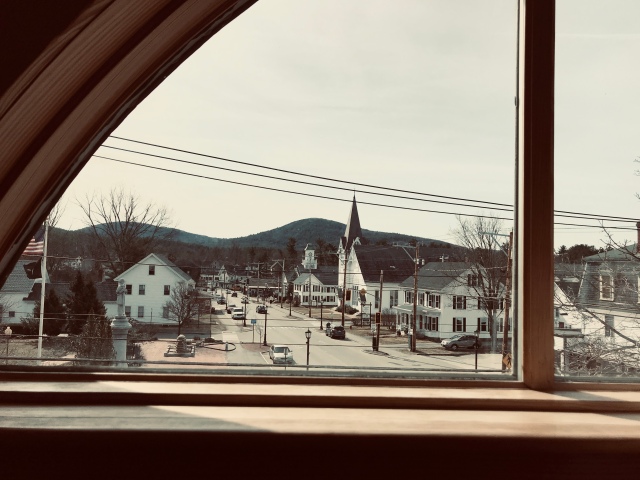 A writer and sugarmaker, Brett Ann lives with her two daughters in stony soil Vermont. Her novel HIDDEN VIEW was published by Green Writers Press in the fall of 2015. Let my writing speak for itself.
View all posts by Brett Ann Stanciu →
This entry was posted in Vermont, writing and tagged #adulthood, #coronavirus, #grateful, #librarylove, #NHvillage, #smalltownlife, childhood, fear, imagination, travel. Bookmark the permalink.

4 Responses to Travels into the Past