Walking beneath the full moon last night, my younger daughter remarks how quickly the moon rises. Our conversation winds into the complexities of the moon phases, and I finally I admit I just don’t know the answer, but my father would.

Although we’re wearing jackets and jeans, the evening’s particularly warm for fall, the moon creamy and luscious. In the dark, flying geese overhead honk.

I mention something about “heavenly bodies,” and — despite my vehemence that this is, indeed, legitimate, these heavenly bodies — my daughters insist that’s too weird.

I don’t use my past reply about common knowledge, because my kids now have this kind of common language that might as well be from some remote Amazonian tribe to my ears. Apparently, I’m one of the last humans in their world to know this term “VSCO girl,” although the subtext beneath the so-called VSCOing activities and accessories remains a little vague to me. Likewise, when I shared some historical lore about the preppy movement (I notice Amazon has helpfully described the official handbook as facetious in case anyone missed that), I’m met with disinterest until I mention the flipped-up collar trend.

In 30 years, the full moon will grace Friday the 13 again. Walking along a dirt road in a light breeze, the girls mention how old each of us will be in 30 years. 30 years, I say, is a long time. And then: I was 30 when I became a mother.

Few lights shine in houses along the road. There’s no one else around. Back at our house, the moon is barely creeping over the horizon. We sit on the back porch while the moon rises, quickly. A luminous, heavenly globe. 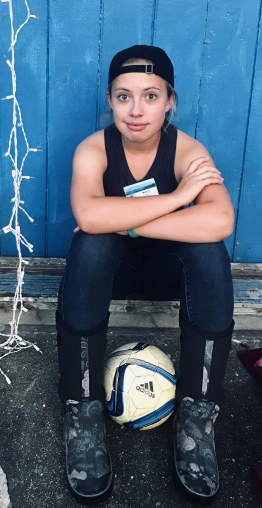