Camping on the shore of Lake Champlain this weekend with three enthusiastic 13-year-old girls, we did summer staying-on-an-island things — we biked and we swam for hours (and I mean hours). We walked on the breakwater at sunset. The loons woke us with their crazy calling at night. I read; the girls explored.

And we talked and talked and talked. The girls, giggling, spied on a father camping nearby. He told his two tiny boys, who wore only orange crocs, that Whining and dessert are counter to each other.

Someday, I told the girls, they might hear themselves saying something equally inane as a parent.

The island’s grass, always so lush and cool, had withered brown with lack of rain. The last morning there, rain began just after dawn. I lay in the tent, listening to the welcome patter, and then, just as I believed rain might be settling in for a day, it abruptly ceased, as if shut off.

In the unrelieved humidity, we packed slowly.

A glossy bit of summer in the land of childhood.

Anybody who has survived his childhood has enough information about life to last him the rest of his days. 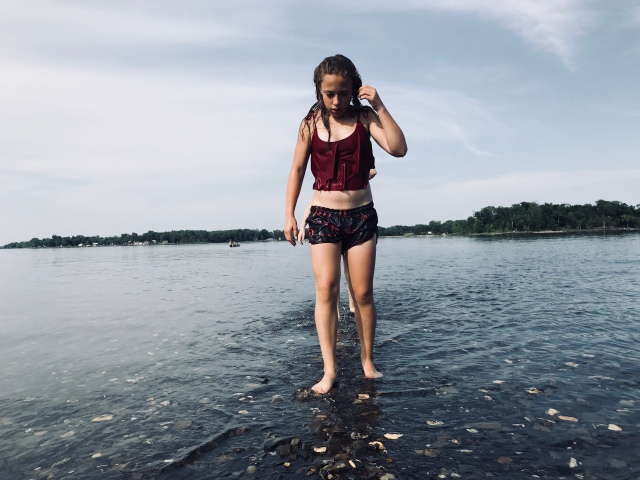 A writer and sugarmaker, Brett Ann lives with her two daughters in stony soil Vermont. Her novel HIDDEN VIEW was published by Green Writers Press in the fall of 2015. Let my writing speak for itself.
View all posts by Brett Ann Stanciu →
This entry was posted in #motherhood, homesteading and tagged #amwritingVermontLiteraryFiction, #childhoodrocks, #familylife, #VermontJuly, camping, Flannery O'Connor, nature, photography, travel. Bookmark the permalink.

2 Responses to Interlude of Laughing