And They Brought Pies…

I never went to work with my parents, although (in very different ways) I heard so many stories I know my parents’ occupations, wittingly or not, fed into my young writer self.

My mother worked the night shift as an RN, floating all over the hospital, from pediatrics to the ER, often returning as my siblings and I were drinking orange juice and heading to school. She always had stories — of washing diesel from a child’s hair or an ER doctor who snapped, took a fire ax to a door, and had to be restrained. She told stories of an administration who treated nurses terribly, of family members in the cancer ward who thanked her on Christmas morning.

My older daughter was in the sugarhouse when she was three weeks old, her rosy cheeks slicked with a sugary patina from the clouds of maple steam. Like many Vermonters, the girls’ father and I have done all kinds of things for work, and generally never hesitated to take the kids along.

This morning, I’m one working piece of Woodbury Pie Breakfast, one of the best of New England traditions, and late last night, my younger daughter helped set up.

In the dark, I walked back and forth from the school to the library, in the snow beginning to fall again, magically wafting down in the outside lights.   Townspeople I knew and didn’t know carried in still-warm pies in their hands, offering their homemade gifts.

I ate another apple pie and ice cream; that’s practically all I ate all the way across the country, I knew it was nutritious and it was delicious, of course.

— Jack Kerouac, On the Road 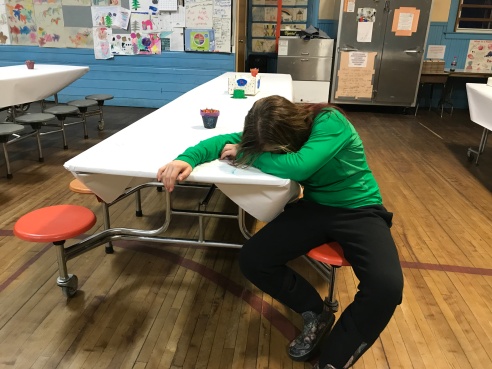 A writer and sugarmaker, Brett Ann lives with her two daughters in stony soil Vermont. Her novel HIDDEN VIEW was published by Green Writers Press in the fall of 2015. Let my writing speak for itself.
View all posts by Brett Ann Stanciu →
This entry was posted in parenting, photography and tagged #amwritingVermontLiteraryFiction, #familylife, #vermontliving, #workingmom, community, Kerouac, New England pie breakfast. Bookmark the permalink.

2 Responses to And They Brought Pies…