In a wet, raw snowfall, I lean against a maple tree behind the high school and talk on the phone. It’s mid-afternoon, and I don’t see a single person.

I’m clearing my head after a work conference with Skype. Skype, Zoom, google hangout — the whole thing — why bother? Vermont has completely shut down, as it appears most of the country and much of the world, too. During this hard time, much of this stuff just doesn’t matter, it seems to me, while other stuff does.

I’m worrying hard about what so many other people are — my job and income. How will my teenager survive isolation as a sole teenager in this house? But other worries — like what kind of parenting I’ve done — seem to have vanished utterly, as if knocked under an ocean wave.

My little family of my two daughters is tighter and closer than we’ve ever been, with both daughters stepping up immediately. We’re hardly alone in this. I hear from family after family, where family means something different now — deeper and richer.

It’s a strange world these days, where playgrounds are empty of children, and no one lingers in the post office, laughing and passing bits of news and gossip. We live in a world of masks and wary eyes now.

Nonetheless, in this upended world, there’s gems, sparkling and true.

I finish that phone call and lean against the tree trunk. The wet snow soaks my jeans and down jacket. I shiver for a while, and then eventually I head home. My daughter is baking a cake. Our deck of cards lies on the kitchen table. 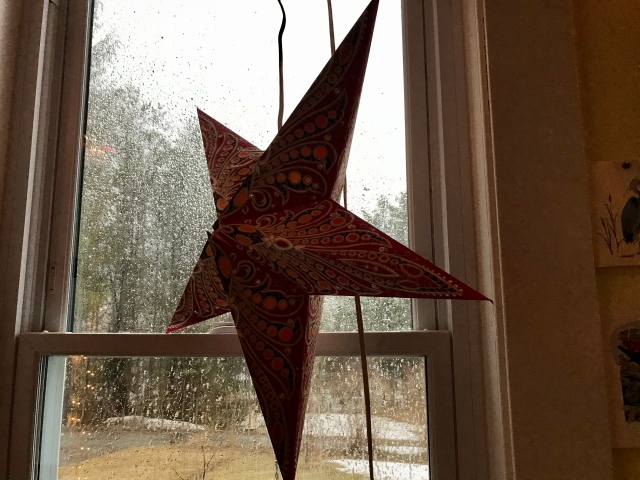 A writer and sugarmaker, Brett Ann lives with her two daughters in stony soil Vermont. Her novel HIDDEN VIEW was published by Green Writers Press in the fall of 2015. Let my writing speak for itself.
View all posts by Brett Ann Stanciu →
This entry was posted in Vermont and tagged #motherhood, #timeofcoronavirus, #VTstrong, #whywrite, art, homeschooling, homesteading, rainbows, travel. Bookmark the permalink.