Okay, that was about cruise ships. My supposedly fun thing was a corn maze which began as lots of fun, driving along maple-lined dirt roads, past hayfields, laughing with the kids about the mist we kept entering and exiting, apparently in the middle of rural-Vermont-nowhere.

In this amazing corn maze, hard-packed dirt paths wound between immensely high corn. An hour in, actually beginning to wonder if we might not get out, I dredged up what limited survival skills I might possess, and ordered the kids to follow “the rule of right” and only make right-hand turns — as if that was the key out. Even smarter, perhaps, we tagged behind a cheerful grandparent-ish couple who practically ran through the maze and got us out.

So much for fun mothering experiences, these few hours that seemed, honestly, a little too close to the marrow, a little too near my life — wander around and conjure some savvy to get out.

Much later that Sunday evening, picking up stray socks and library books and putting away laundry — getting ready for a working week — I realized I failed that metaphor for life: enjoy the journey. Take note.

Because here’s something else that’s weird but true: in the day-to day trenches of adult life, there is actually no such thing as atheism. There is no such thing as not worshipping. Everybody worships. The only choice we get is what to worship. And the compelling reason for maybe choosing some sort of god or spiritual-type thing to worship—be it JC or Allah, be it YHWH or the Wiccan Mother Goddess, or the Four Noble Truths, or some inviolable set of ethical principles—is that pretty much anything else you worship will eat you alive. 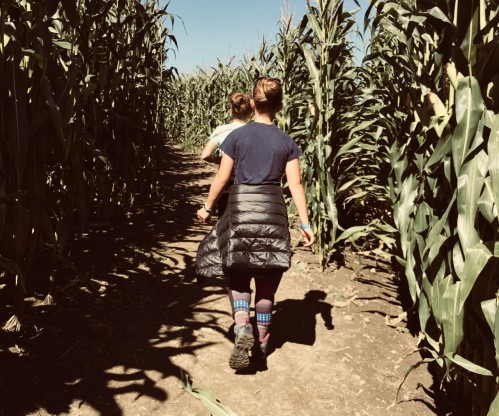 4 thoughts on “Why I Hate the Corn Maze”