Come what may — more April snowflakes, cold rain, glittery frost in the weeds against the barn — in our corner of Vermont we’ve stepped across the line to spring.

Yesterday, in a chilly rain, my daughters and I peered beneath the pear trees and along the thicket of roses, now merely a brown tangle of prickly vines. But the earth reeked of thaw, of soil melting its cold frozen heart, releasing its mysteries of worm and grasping root.

Thaw begins not with warmth, but with the subtle gradations of less cold. And how darn good our earth smells, breathing. 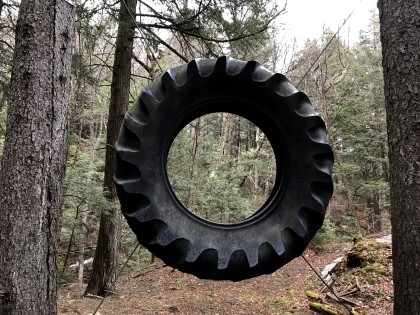 A writer and sugarmaker, Brett Ann lives with her two daughters in stony soil Vermont. Her novel HIDDEN VIEW was published by Green Writers Press in the fall of 2015. Let my writing speak for itself.
View all posts by Brett Ann Stanciu →
This entry was posted in mothering, ten thousand things and tagged #amwritingVermontLiteraryFiction, #earthalive, #familylife, #vermontspring, Buson, photography, travel. Bookmark the permalink.