The summer my second daughter was an infant, the season was particularly hot and sticky — at least in my memory it was. That summer I just didn’t do certain things — I washed clothes and probably even folded them, but I rarely put them away.

Domestic chaos? Maybe. But I knew I would never have another baby, the  irreplaceable sweetness of a nursing infant in arms.

We were at Dartmouth Hitchcock Medical Center that summer with our 6-year-old for a very minor procedure, and my then-husband and I took turns walking up and down the hospital hallways with an infant. At one point, I stood swaying with my sleeping baby from foot to foot, reading the posters on the wall.

One watercolor was a purple hyacinth blossom with the words beneath: Choose joy.

When I drove away from the hospital, with all four of us, and crossed the river back into Vermont, I was so light-hearted, so happy. It was such a minor thing that had occurred, and we were all together and well.

Now that infant daughter is a teenager, the oldest daughter a young woman. Like all families, we’ve lived through the gamut of happiness and grief and rage. Every now and then, I remind myself, slow down, breathe deep, and finger the strand of life that’s joy.

You might as well answer the door, my child,
the truth is furiously knocking. 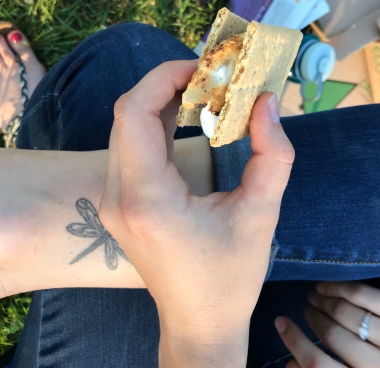 A writer and sugarmaker, Brett Ann lives with her two daughters in stony soil Vermont. Her novel HIDDEN VIEW was published by Green Writers Press in the fall of 2015. Let my writing speak for itself.
View all posts by Brett Ann Stanciu →
This entry was posted in mothering, photography and tagged #abandonment, #missingfather, #motherhood, #strongmothers, Lucille Clifton, sick children, spirituality, travel. Bookmark the permalink.