In Vermont, November is a month of diminished color, the profusion of blooming gardens long since gone the way of frosty death. This afternoon, I stopped by the Hardwick reservoir, drained low. Seagulls crouched in the center, surrounded by shallow water skimmed over with green algae. The summer lake had sunk into a thick, foul-smelling muck, its bank strewn with a rusting car gas tank, broken bits of plastic, crumpled paper cups. The creatures had left their debris, too. My fingers reached down for an emptied snail shell about the size of a quarter.

A mist began falling, and the wind blew dried leaves. A flock of gulls, far down the reservoir, lifted into flight, a great white undulation of wings, rising and falling, carrying these birds across the sky, spread out between the water and sky like dozens of fluttering prayer flags. They landed and hunkered into small knobs on the muck.

I had stopped there hoping to see a heron with its immense wings and steady flight. Instead, these common birds – the trash pickers and pesky divers –  opened like an ornate fan in surprise and exquisite splendor, pristine white against the gray sky and trees, before folding shut again.

…Whoever you are, no matter how lonely,
the world offers itself to your imagination,
calls to you like the wild geese, harsh and exciting-
over and over announcing your place
In the family of things. 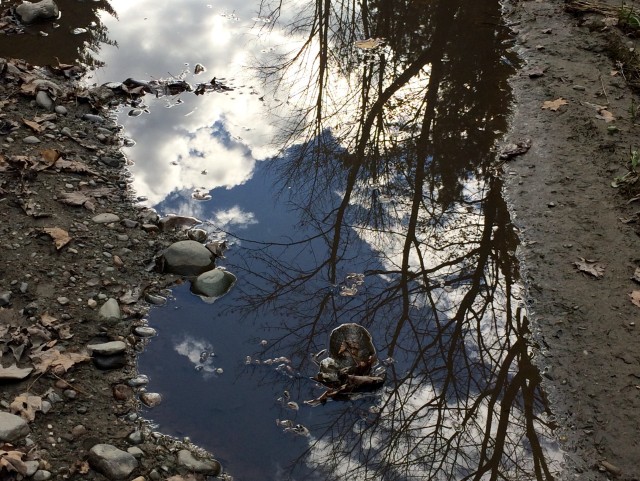 A writer and sugarmaker, Brett Ann lives with her two daughters in stony soil Vermont. Her novel HIDDEN VIEW was published by Green Writers Press in the fall of 2015. Let my writing speak for itself.
View all posts by Brett Ann Stanciu →
This entry was posted in Uncategorized and tagged autumn, gulls, Mary Oliver, photography, Vermont. Bookmark the permalink.