27 years ago, my oldest nephew was born. I was visiting his great-grandparents on that day. I had recently entered that family, and I was on my very best, most sparkling, ready-to-please behavior. His great-grandfather walked me around his property, pointing with pride to the peach trees. Elderly and ill, a minister by trade, he remarked he wouldn’t be around long to savor that fruit, but someone else would.

I was 22 then, fresh out of college, naive and deeply in love. I’ve thought back often over these years to his comment about those peach trees, and how much those words summed up that man’s life. Even then, hardly beyond childhood myself, I wanted that equanimity.

A few years later, after his death, and his wife was moved to Vermont to live nearer her two daughters, someone else bought the house and cut down those fruit trees. That, I suppose, is a whole different philosophy. It’s not mine to suppose what he would have made of that action, but it’s a question I’ve pondered, whose answer I’ll never receive.

A little girl under a peach tree,
Whose blossoms fall into the entrails
Of the earth. 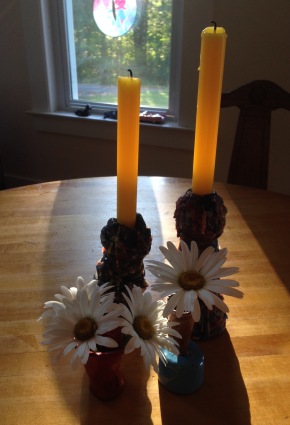 A writer and sugarmaker, Brett Ann lives with her two daughters in stony soil Vermont. Her novel HIDDEN VIEW was published by Green Writers Press in the fall of 2015. Let my writing speak for itself.
View all posts by Brett Ann Stanciu →
This entry was posted in mothering, poetry and tagged #familylife, #familyrelations, #mortality, Basho, spirituality. Bookmark the permalink.