The Town at Night

Driving through Hardwick, Vermont, last night, beneath a crescent moon, the 11-year-olds in the backseat playing a word game and clapping, the 17-year-old  dreaming thoughtfully at the wheel, I marveled at how good Hardwick looks in the dark, the handful of streets lit up, the Town House’s double doors open for a musical, foyer chandelier shining welcomingly.

Run-down Hardwick, with its perpetually empty storefronts, the town of two auto parts stores, five gas stations with cheap greasy food, one food co-0p with pricy produce, and one thrift store. Reservoir of cheap beer and highly-taxed cigarettes and way too many scratch-off tickets. A town of more well-heeled days, called theirs now by those who have moved in with plenty of money or education or both, while those who have lived here for generations frequently are scant on both.

I left the Town House before the finale, standing outside in the cold. Freakishly, a structural fire burned behind the Town House, bright flames turning billowing smoke and steam bright red, split through with blue police lights. The cold gnawed at my feet. Overhead, clusters of stars and that curl of moon pushed through the streetlights and hazy atmosphere. From the closed doors, I heard a girl’s clear song, her voice graceful as a heron in flight, slowly winging its way through the sky.

Oh, there’s nothing wrong with the children. Only the governesses. 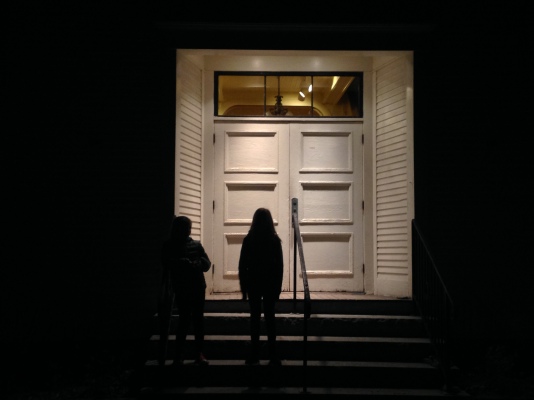 A writer and sugarmaker, Brett Ann lives with her two daughters in stony soil Vermont. Her novel HIDDEN VIEW was published by Green Writers Press in the fall of 2015. Let my writing speak for itself.
View all posts by Brett Ann Stanciu →
This entry was posted in mothering and tagged #amreading good books, #amwritingVermontLiteraryFiction, Hardwick Vermont, homeschooling. Bookmark the permalink.