This morning, the world smells so good. With my coffee cup, I walk around the dewy garden in my bare feet. There’s weeding to be done and more sowing of seeds and plants. We’re in a long dry patch, and I’d love some rain. Every night, I water patches of my garden.

But this morning, for this moment, how good this all smells, the crickets singing, and this whole day spreading before us.

I recently remembered that, when I was a girl, I wanted to live on a farm with a blackberry thicket. I didn’t particularly want a cow, but how I lusted after fruit trees and garden rows and overgrown lilacs. Behind our house now, the wild blackberries are profuse with blossoms near that fox den.

The pandemic continues. The virus spreads. But, for now, we’re home and outside — and it’s glorious summer. 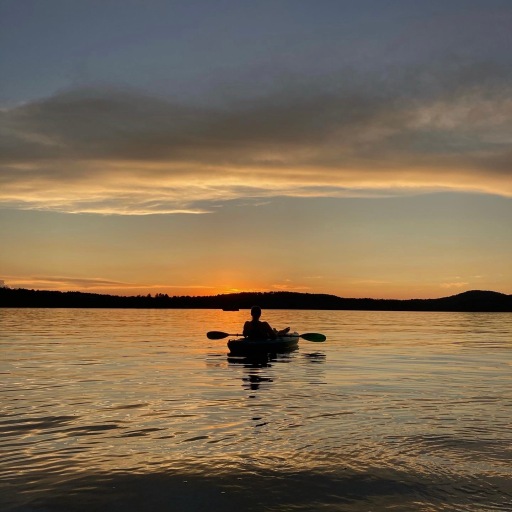 How many weeks are we into the Stay Home order? Thursday, I let my daughter cut my hair in the kitchen. Delighted, she made her first snip in the back and said, Whoops.

What does it matter, anyway? It’s just hair.

In the evenings, we walk up a nearby dirt road, seeking the sunset. Hardly anyone is out — a few passing pickups, often with a driver wearing a mask. Nearly every night, we see deer in the hayfields that are greening, bit by bit.

Today, kayaking, we saw a bald eagle in a white pine. We paused, watching as the eagle dove over the shallow end, flashing its enormous wingspan above a family of swimming ducks, then swept back into the tree.

One thing I’ll remember most about this time — and perhaps most fondly — are the endless walks. No complaints, because why bother?  This is where we are now.

Already the first branch-tips brush at the window.
Softly, calmly, immensity taps at your life.

At the northern end of the reservoir, we kayak north, where the water flows into the Black River, crossing the Canadian border on its meandering way to the Atlantic.

Surrounded by cattails, we stop at a beaver dam, listening to the spilling water. The late afternoon is sticky, the water’s too mucky and weedy for swimming, the girls who have been up early either for soccer practice or work are out-of-sorts, irritable.

What’s on the other side of that beaver dam? I edge near, curious, but there’s no way I’m getting around.

Back on the wide reservoir, we spread out. At the far end, a loon calls, which fails to impress either daughter. The teenager says, I’ve heard that before.

And yet, hungry and tired as both daughters are, neither seems in any rush to leave. Clouds jostle against Buffalo Mountain in the distance, promising rain, but not too quickly. The girls’ paddles lie across their kayaks as we drift.

Later that evening, as I lie on the couch, reading, rain begins to patter down. The older daughter goes out for a run. The younger daughter and I pull on raincoats and cut through the thorny blackberries, silently, our faces wet.

When I was 20, I taught myself how to adjust the valves on an even-then ancient Volkswagen bug. My millennial daughter, in contrast, takes great pleasure in hoisting her kayaks on her roof racks, showing up the quarreling boys beside her who wrestle with their rowboat.

On a Monday morning of a week that will end in August, the last of our Vermont summer months, hurray for young muscles. I’ll breathe in some of your good cheer. 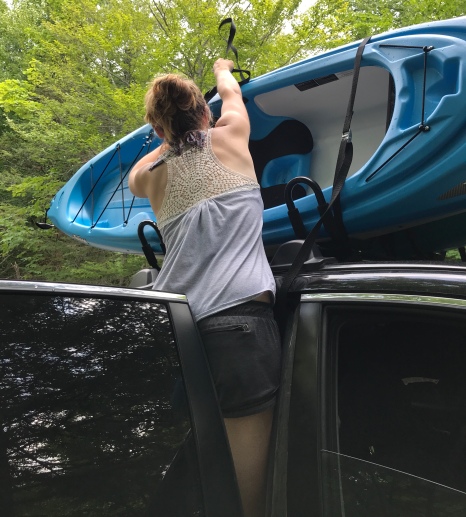 In the rain, the girls pushed the kayaks into the water. The wind blew up, and I sat on the shore, my plan to lie on the grass and read foiled. Later, I went down to the end of the pond and sat at the edge while the rain washed through and sunlight sprinkled the water. The inky black head of a loon surfaced.

The girls paddled over to me, laughing. A heron cut across the cloudy sky. The peepers chorused busily. A boy appeared with his fishing pole.

This cold May: every day, a little more green, a bit more Technicolor, antidote to That Winter…

…here deep in the mountain
everywhere the sound of the pines. 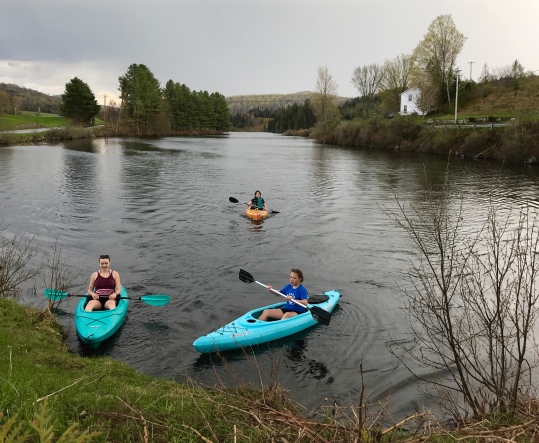